I like to study fly patterns as much as I like to make stuff from trash. I know that's a big statement. I really like to make stuff out of the discards of modern society. We make a lot of trash a group. So I have become a observer of that pattern of behavior.

I also have become interested in what did those that came before have to tie with? Their trash pile were considerably smaller. They didn't waste so much. Didn't have so much to waste either. Food didn't have wrappers and disposable goods weren't a thing yet.

So what did they have to pick from? They were more agrarian. Farming was a thing that a larger population engaged in. So lets focus on natural items. Fur and feathers. If you ate it, it came in the wrapper God put it in.

A lot of chickens.

Chickens still rule supreme as the go to material. Dry flies and streamers and everything in between. Chickens wound up on the table. This lends to a lot of feathers at the end of the processing. I know they stuffed a good many into pillows. True enough. That still left a availability.

Folks hunted. Deer and turkey. Turkey were obviously similar to chicken. Bigger feathers and colors. Deer hair and other large game could be saved. That hair has great buoyancy properties as well a movement when added to flies.

So after pondering the possibilities and resources I decided to tie a few with just those materials. I did take the liberty of using modern hooks and threads. I could bring myself to tie flies with cotton or wool threads. But I am sure the ancestors did just that.

The next few flies I would like to show you will be tied with only stuff those fly fishers here in America had. My offering may be modern patterns but again only materials found in the time period 100 + years ago.

I live among a lot of farms and folks getting back to the land. Also have a good many friends who hunt. Chicken feathers from the barn yard. Deer hair from the fields. Those will be the focus of this experiment. I will share two chicken focused patterns and two deer hair offerings. They will not be dyed or genetically raised sources. Organic if I may. 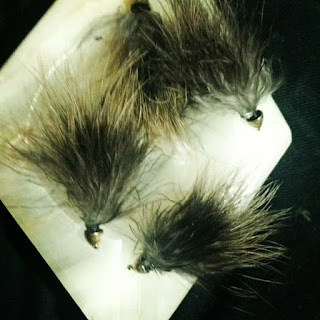 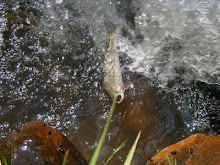